The intelligent Voyager grazing system consists of two mobile robots. A solar panel provides power for the battery and gives the robots total autonomy. The robots allocate the forage by means of a pre-programmed time and number of metres.
The only thing the farmer has to do for a new field is to set how many metres per day he wishes to give the cows and the Voyager will make the calculations and release this distance during the day. An electrified wire is moved forward and releases the pasture during the day, but can also be used to drive the cows back inside several times a day, for milking for example. The wire remains tight thanks to the reel in one of the robots. The robots communicate with one other via Bluetooth and follow the outline of the pasture by means of a wire follower. The pasture is thus fenced off from the grazing cattle. 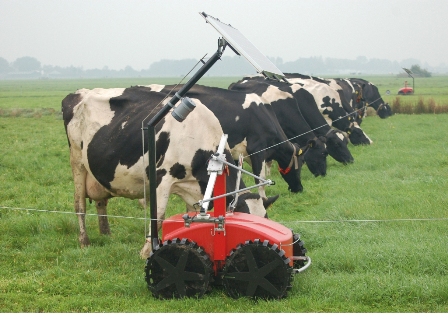 Frontal grazing by means of the Voyager is a method of intensive grazing management that allows livestock to continuously graze on fresh forage. Because the cows have a small strip of fresh pasture each time, the grass is well cropped and dosed, which not only makes the rumen function better, but also achieves a better proportional intake of protein and sugars. This system utilises high stocking densities but has the potential advantage of having a minimal amount of forage loss. Various studies around the world have demonstrated increased efficiency when frontal grazing is applied, resulting in lower feeding costs and/or increased milk yield.

As from today the Voyager automatic grazing system will be available world-wide in limited numbers.