While there are many brands of stationary engine on the market, troubleshooting tips will apply to most models.

This article explains how to fault-find in an engine that refuses to start and outlines some of the more unusual problems that might be difficult to determine.

Air-cooled stationary engines power a range of farm equipment and are often called into duty after sitting idle for long periods.

While many engines will fire into life with no more than a fresh tank of fuel, others will resist all attempts to start and time is wasted tracking down the cause of the problem.  When the engine is part of a firefighting unit that has not been operated since the previous summer, the results can be more serious.

The best way to protect an engine used infrequently is to ensure all fuel is drained from the tank when the job is finished. When petrol evaporates, it leaves a varnish that is difficult to remove and which will clog carburettors.

If a problem arises, the following troubleshooting tips will help in finding the fault. 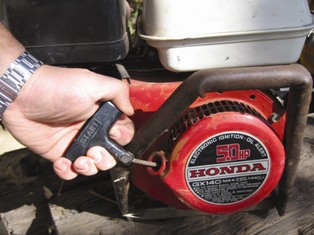 To check for fuel starvation, remove the air filter and pour a small quantity of fuel down the carburettor throat.  The engine should then fire when cranked over or the cord is pulled.

An engine that has been sitting idle with stale fuel in the tank or where the fuel has evaporated away could have a blocked fuel system.

Often, a blockage in the main jet can be removed by sealing the intake with a flap of rubber and cranking the engine a few times.

Pay attention to both the choke and throttle butterfly valves.  The throttle often can become stuck in the closed position after sitting idle for some time.

Spark
Remove the spark plug and place it against the cylinder head with the lead attached. A blue spark should be visible at the gap when the engine is cranked over but note it will be more difficult to see in bright conditions.

If no spark is present, check all leads, including low oil level and ignition stop leads for shorting.  Replace the spark plug with another that is known to be working properly and check again.

Modern solid state ignition systems have no breaker points and the coils rarely fail.
But if no other cause is found, this could be the problem.

In rare cases, spark plugs will spark when removed from the engine but will fail to fire when under cylinder compression. 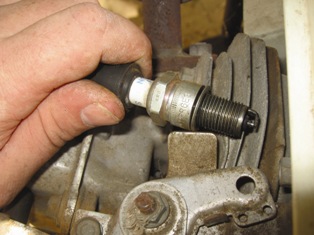 1 - A healthy blue spark is vital for an engine to run properly.  When checking the spark, use a spark plug known to be working and keep away from any spilt fuel

Compression
While checking for other faults it will quickly become apparent if an engine lacks compression as it will turn over too easily.

On a well-used engine, wear is a likely culprit but internal damage such as a scored cylinder wall could also occur.

Engines, especially side-valve configurations, can suffer from stuck valves if they sit idle with one valve held open.  As a precaution, after the engine has stopped rotate the flywheel forward against compression to ensure both valves are shut.

A blown head gasket usually can be heard hissing as the engine is cranked over, while leakage through the valves is more difficult to diagnose.

Any sign of gas being blown back through the intake points to a poor inlet valve, while sucking through the exhaust (felt by placing a hand over the exhaust while cranking the engine) points toward the exhaust valve being the culprit.

A leaking valve can be caused by carbon stuck to the valve seat or a pitted, chipped or bent valve.  Sometimes valve seat inserts become loose, allowing compression to escape.  Fix by centre-punching the block around the edge of the insert. 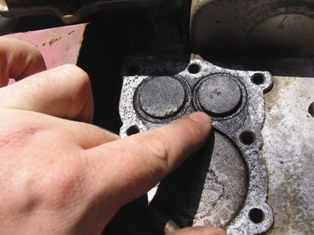 2 –Stuck valves are common in engines that are left static for any period, especially in side-valve engines.  Often the head requires removal to free the offending valve but with care, a bent screwdriver can be used through the sparkplug hole to free the valve. 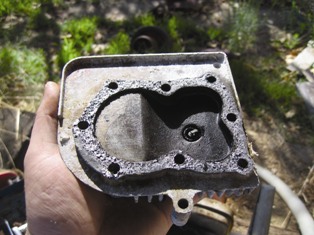 3 – Head gasket failure or a cracked or warped head will  lead to a loss of compression.  Ensure the correct muffler is fitted to avoid overheating and always clean the cooling fins and cowling of dust and debris.

Timing
Engine timing is rarely at fault when an engine refuses to start.  Indeed, the timing cannot be adjusted on almost all modern air-cooled stationary engines.

In rare cases, the flywheel key could have sheared off, altering the ignition timing.  This can occur if the engine has stalled due to sudden overloading such as a choked auger. The momentum in the flywheel causes it to rotate on the crankshaft, shearing the key.

Two-stroke Tips
The design of two-stroke engines means these have a sealed crankcrase and no intake and exhaust valves.

Failed crankcase seals or bearings will lead to loss of crankcase compression, resulting in starting difficulties and lack of power.

Two-stroke engines as fitted to chainsaws and line trimmers tend to suffer from blocked mufflers, which can be difficult to diagnose.  Often the problem is as simple as a hornet nest inside the muffler.  Other issues include severe sparkplug fouling and a blocked fuel tank breather.  This is usually located in the fuel cap and leads to a vacuum in the fuel tank.  The engine will usually start and run for a short time before stopping. 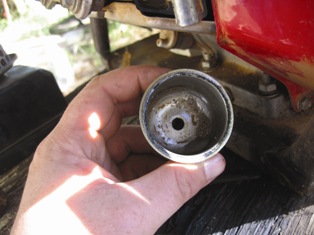 4 – Sediment build-up in fuel bowls is common.  While heavier particles generally will remain in the bowl, lighter particles can block the carburettor main jet. 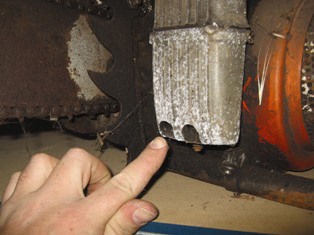 5 – Blocked mufflers will prevent an engine from running and can be difficult to diagnose.
While carbon tends to accumulate in two-stroke exhausts, blockages from hornet nests can also occur.