What are good bugs?

Most pest species (bad bugs) have natural enemies (good bugs) that regulate their populations. These good bugs are known as beneficial organisms (also called ‘beneficials’) and include predators and parasitoids. They form the biological component of an Integrated Pest Management (IPM) strategy.

How can I use beneficials on my small farm?

Common beneficials which may be present on your small farm

Brown lacewings (Micromus tasmaniae)
The adults are easily recognised by their lace-like wings (Fig. 1). Both the adults and larvae are common predators and eat any insect that is of an acceptable size, as well as insect eggs. They show a strong preference for aphids and are usually found where they are present. 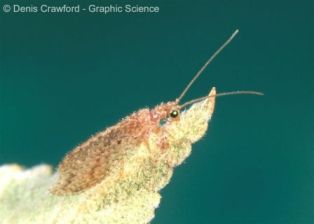 Carabid beetles
These are general predators and are also known as ground beetles (Fig. 2). The adults feed on caterpillars, beetles and earwigs, while the larvae usually feed below the soil surface on pests such as cockchafers. 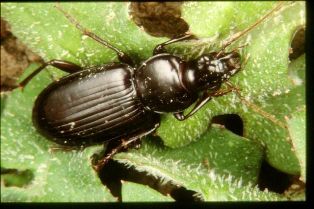 Damsel bugs (Nabis kinsbergii)
Both the adults (Fig. 3) and nymphs are general predators and eat caterpillars, aphids, other soft-bodied insects and insect eggs. They are able to kill medium-sized heliothis caterpillars (Helicoverpa species). 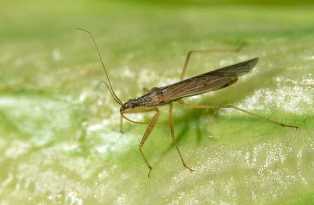 Earwigs
There are both pest and beneficial species. The species below (Fig. 4) is native to Australia and is thought to be a predator, not a pest. 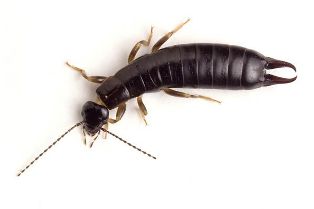 Hoverflies
The adults (Fig. 5a) are easy to recognise because as their name suggests they hover in the air (often above flowering plants). However, it is the larval stage (Fig. 5b) that is predatory on aphids. Female adults lay their eggs near aphid colonies, so the larvae are near a food source when they emerge. 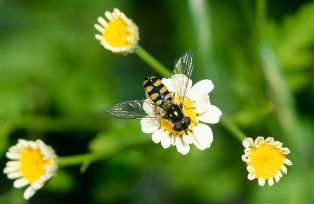 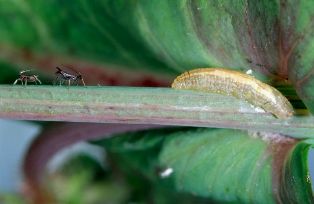 Ladybirds
There are several beneficial species. Aphids are the main prey of ladybird adults (Fig. 6) and larvae, but the larger species are general predators and will also eat other pests, such as small caterpillars, and insect eggs. 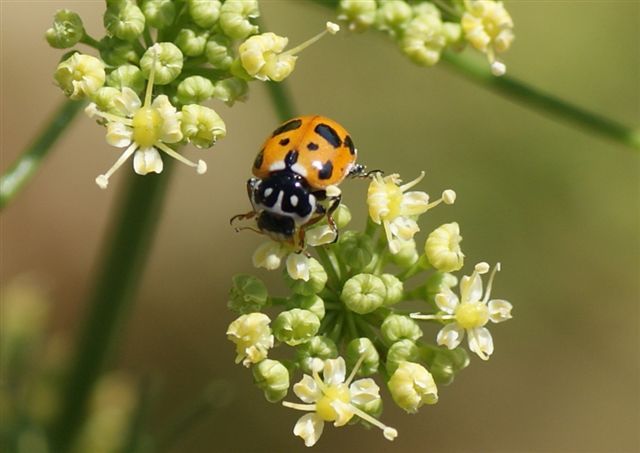 Parasitic wasps and flies (also known as parasitoids)
There are many species which parasitise aphid and caterpillar pests, and also insect eggs. For example, the Aphidius wasp attacks aphids. The female wasp stings an aphid and lays an egg inside its body. The wasp larva develops inside the aphid and eventually emerges as an adult, leaving behind an empty aphid shell (or ‘mummy’) (Fig. 7). 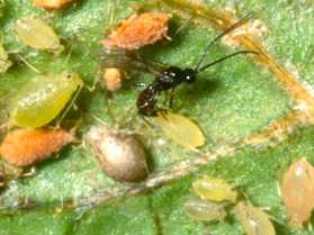 Figure 7: Parasitic wasp (Aphidius species, beneficial) attacking an aphid (pest). The aphid which appears enlarged and bronze in colour is a ‘mummy’ (an empty aphid shell, left behind after an adult wasp has emerged).

Predatory mites
Many different species help control pests. An easy group to identify is the snout mites (Bdellidae) (Fig. 8a) as they have a characteristic pointed head. All the mites in this group are predators and prey on insects, such as the lucerne flea (Sminthurus viridis) (Fig. 8b) which is a pest on plants such as canola (Brassica napus), clover (Trifolium species), lucerne (Medicago sativa) and cereals. 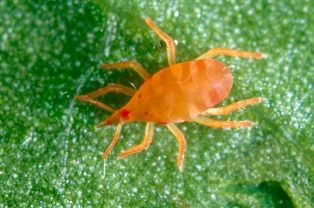 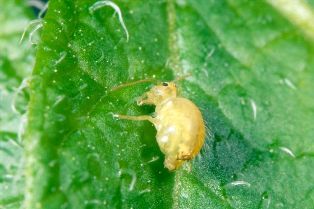 Shield bugs (Oechalia schellenbergii)
These are also known as stink bugs. They are similar to damsel bugs, but are larger and stouter. The immature nymphs have bright red markings on their backs which distinguishes them from the mature stage. Adults (Fig. 9) feed mainly on caterpillars, such as heliothis larvae. 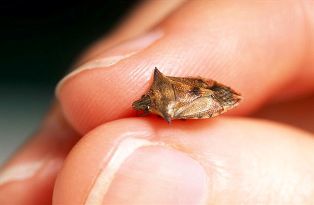 Spiders
There are many different types of spiders (Fig. 10) which prey on a wide range of pests. 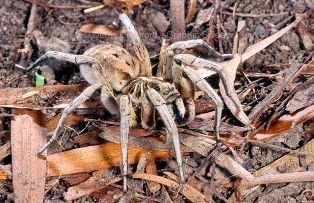 Figure 10: All spiders are predators (beneficial).

Correct identification
It is obviously important to get this right! It can be a complex process though because some beneficials and pests look similar. Additionally, learning the different stages in the life cycles of pests and beneficials is helpful too, as some larvae do not resemble the adults that they will grow into (eg Figs. 5a & b). Furthermore, being able to tell the difference between eggs belonging to pests and beneficials can also be useful.

Many thanks to Paul Horne and Jessica Page from IPM Technologies for their support. The images in this article were kindly provided by IPM Technologies and Denis Crawford of Graphic Science.