Getting Started with Dorper Sheep

The Dorper sheep is well known for its ability to adapt and survive in a variety of climatic and grazing conditions. The Dorper was originally bred from the more arid regions of South Africa in the 1930’s. Initially imported into Australia in the mid 1990’s, its suitability to a range of climatic conditions and low maintenance has seen the Dorper develop into one of the largest meat sheep breeds in Australia.

Characteristics of the Dorper include:

The only difference between the Dorper and White Dorper is in the colouring of the head. The Dorper has short dullish-black hair whilst White Dorpers have dull white coloured hair. Despite this difference, the term “Dorper” is often used to describe both breed types.

Dorpers are known as a low maintenance, easy care breed which can adapt easily to a variety of conditions, are non-selective graziers and are one of the only breeds that thrive in harsh conditions.

The Dorper is known to be resistant to parasites and diseases which also reduces the need to drench and use treatments for protection.

The Dorper sheds its fleece during the warmer months – late Spring/Summer. The wool simply falls off the skin and onto the ground where it breaks down into the soil over time. The fleece regrows in Autumn when the temperature becomes cooler. As they shed their wool, they are a favourable breed in pastoral areas as they do not require shearing and are less susceptible to flystrike, eliminating the need for mulesing or fly treatments. 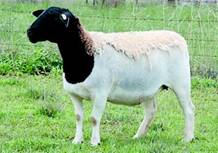 Figure 3: A dorper sheep in the process of shedding its fleece.

The animal is characteristically barrel shaped with short, dullish black or white hair on the head. A short, loose light covering of hair and wool (wool predominating on the forequarter) with a natural clean kemp underline, is a typical breed standard. An even distribution of a thin layer of fat compliments the breed.

The Dorper sheds its fleece avoiding the need for mustering for shearing, crutching and fly control.

There is little difference between blackheaded and whiteheaded Dorpers - the choice is a matter of target market preference.

The Dorper are an economical breed because of their excellent feed utilization and conversion, they don't need shearing, crutching and mulesing, and they are disease resistant

Purebred Dorper rams reach a liveweight of 90-120 kg and ewes 50-80kg. The Dorper carcass has a good conformation and fat distribution.

Trials and producer experience in Australia indicate that it should be possible to breed Dorper-Merino F1 lambs with a bodyweight of 36kg at 105-120 days, to produce a carcass of about 16kg.

The Dorper is now well adapted in South Africa to a variety of climatic and conditions. It thrives in arid to semi-tropical areas and 100mm-760mm rainfall.

The Dorpers have the ability to thrive in harsh conditions. They were developed to be turned off quickly from arid, extensive grazing conditions in South Africa and have the potential to be produced successfully in a wide range of climatic conditions in Australia.

The Dorper is one of the most fertile of the sheep breeds, with potential lambing intervals of only 8 months. Lambing percentages in excess of 150% (2.25 lambs per annum) are possible and 100% is feasible for most areas.

Short lambing intervals have various advantages, of which greater selection possibilities and the sale of larger numbers of lambs are the most important.

The Dorper ewe is a very good mother and protective of her young. Multiple births are common, with some instances of triplets recorded. Lambs are extremely mobile at birth and survival rates are high.

They are non-selective grazers. Experience so far suggests that Dorpers can adapt to most grazing conditions. There is evidence that they prefer fibre to grains and they respond well to good quality hay.

Purebred lambs will start to graze in the first few days after birth. F1 lambs after about two weeks.

The Dorper can be advantageously incorporated into under-utilized pastures of lesser quality, thus converting a poor asset into profit.

The Dorper is polyoestrus (can breed continually, with no defined season). Their breeding intervals can be as short as 8 months or 3 times in 2 years. Running rams with ewes continuously is one option that may stimulate reproduction, however it is also likely that ewes will adjust their fertility according to conditions.

Dorper lambs have an inherent growth potential (ability to graze at an early age) They grow rapidly and can attain a high weaning weight.

Markets can be developed in four key areas:

The Dorper sheep is fast becoming a favourable breed in areas of organic production (pastoral areas) as they have characteristics that result in no need for drenching or other treatments. As the organic lamb market increases, so too is the demand for organic Dorpers.

This article is courtesy of the Dorper Society of Australia Inc. 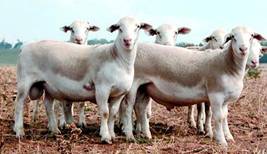